I never believed in abiding by astrology or palmistry. I follow astrology only casually, picking and choosing the info that makes sense to me. I’ve never had a tarot reading; never seen a medium, and see fortune cookies as sheer amusement.

Yet suddenly in Japan, I was bombarded by ‘signs’ and fortunetelling opportunities everywhere I turned. At first I bought two so-called ‘love’ scrolls in Osaka, simply because they were cute-looking. 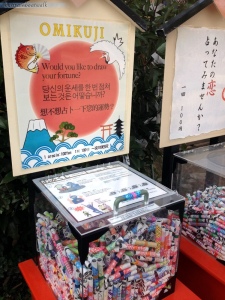 I treated them as regional souvenirs and only opened then when I returned to Canada. That completely breaks the tradition, and now I’m probably damned for messing with the true scroll-reading procedure (read onsite, discard if the fortune is bad by tying it to a nearby tree or other structure erected for the cause).

On New Year’s day, a friend brought me to a shrine to pray, though I have no religious affiliation. We said instead that I could make a wish. When we were done, we noticed a tent selling several types of omikuji. 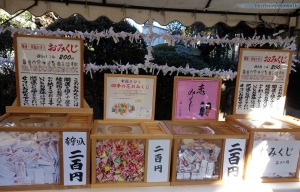 For fun, I decided to buy one. I chose based not on purpose or need, but by the cuteness of the packaging. The omikuji designated for children nearly won me over by their triangular 3D shape, but in the end I chose a ‘love’ scroll because it came with a cute dollie.

Some elements of the fortune sounded eerily like they were referencing events from the past month of my voyage. Later in my trip, other signs and symbols appeared and made me go Hmm…

I figured time would tell if the fortune had any bearing on real life. Some things were predicted for the second half of 2016, so I cannot say if and when they’ll occur. But ever since I bought this omikuji, weird things have been happening. Nothing bad, nothing good. Just… interesting and easily associated with the scroll fortune.

One of the Osakan ‘twins’ I opened last month was a little sillier, telling me my lucky color was yellow. Earlier that day, I’d been shopping and wanted to buy a black t-shirt with a bright yellow print. Though I don’t gravitate toward yellow at all – especially not in clothing – I just really wanted that shirt! In the end I didn’t buy it. When I read the scroll, I thought What kind of lucky color is yellow? I remembered the shirt, and half regretted not buying it. I realized the humor in it. Or did the omikuji hold a grain of truth?

The scroll also said my lucky object was a toothbrush, though. Maybe it’s telling me to go brush my teeth.